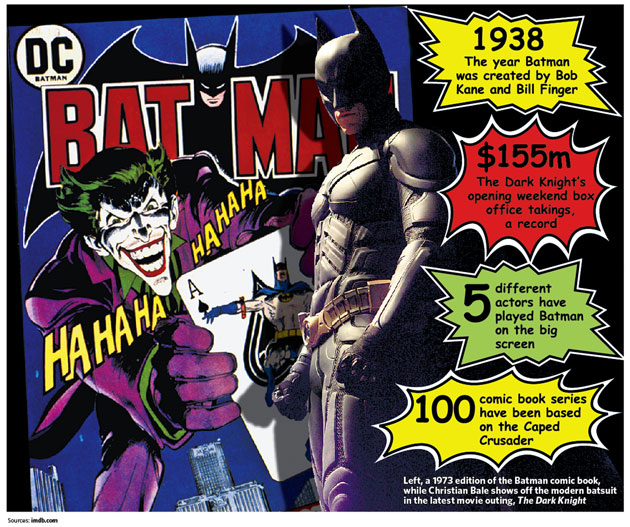 In 1939, Superman had recently appeared in Action Comics and was an immediate success. The buzz around this character led of the editors at National Comics Publication (which would eventually become DC Comics) to request more superheroes in their collections. Writer and animator Bob Kane came up with “The Bat-Man” and worked with Bill Finger to perfect the design and backstory.

Batman is the alter ego of Bruce Wayne, a wealthy philanthropist and owner of Wayne Enterprises. He operates in Gotham City and became Batman after witnessing his parents’ murder and swearing vengeance against criminals. Other influential characters in Batman’s world include his sidekick Robin, his butler Alfred, police commissioner Jim Gordon, and nemesis the Joker.

Batman first appeared in Detective Comics #27, cover-dated May 1939. The new character was as great a success as the publishers hoped he would be, eventually leading to the cover logo being written as “Detective Comics featuring Batman.” As is to be expected, this issue remains one of the most valuable comic books in history. It’s relatively rare and will fetch high prices, and in February 2010, one copy sold for almost $1.1 million.

Fans quickly learned more about this influential character, as a two-page story in issue #33 revealed Batman’s origin. This issue was released in November 1939. Comic book readers continue to fall in love with the character, pressing National Comics Publication to make Batman the main cover feature of the title starting with issue #35, which released in January of 1940.

In April, Batman’s sidekick Robin was introduced. This new character led to a huge increase in sales and created a new trend of superheroes with young sidekicks. With one simple addition to the Batman Universe, the Golden Age of Comic Books was born. During this era, fans met incredible villains like The Penguin in issue #58 and The Riddler in issue #140.

Beyond these initial releases and introductions of characters a, a few of Batman’s appearances stand out as some of the most valuable comic books on the market. In 1941, Superman and Batman’s stories started to be included in the same issue. The first issue of the series was titled “World’s Finest Comics,” contrary to the original “World’s Best Comics.” This title would stick with the series for the next 45 years, and this initial issue has been known to fetch upwards of $10,000.

The appearance of villains has been known to make comic books more valuable. For instance, in 1941, The Joker appeared on the cover for the first time in Batman #11. It’s not uncommon for this issue to go for $16,000 or more. Another villain-central book that typically sells around the same amount is Detective Comics #40, which features the first appearance of the villain Clayface.

While these figures might seem like high prices, they’re truly rookie numbers compared to some of the most valuable issues. We’ve already discussed Detective Comics #27, considered the second most valuable comic book in the world after Action Comics #1, which featured the first appearance of Superman. Batman #1 was Batman’s first solo comic book and it features the debuts of Catwoman and The Joker, often fetching $400,000 or more. Detective Comics #38 features the debut of Robin and has sold for over $84,000!

If you’re thinking about selling your comic book collection, Collectibles Investment Group is able to provide an accurate, quick, and free appraisal. Contact us today to learn more!