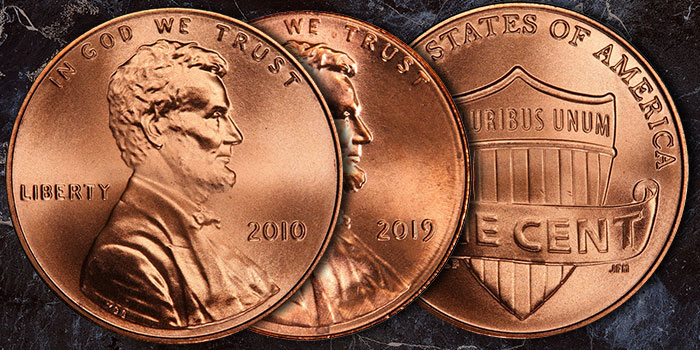 So many of us underestimate the humble penny, but its history is actually quite fascinating. In today’s coin collecting world, people are often more concerned with selling silver coins or selling gold coins, so the Lincoln cent doesn’t get as much attention. Here, we’ll give this incredible coin the attention it deserves.

Before the Lincoln penny came into being, America used the Indian Head cent. This coin was introduced in 1859, but in 1904, President Theodore Roosevelt was looking for a change. He complained that American coins didn’t have any artistic merit and wondered if it might be possible to hire a private artist to redesign the nation’s coins. The U.S. Mint hired sculptor Augustus Saint-Gaudens to create new designs for the cent, as well as the double eagle, eagle, half eagle, and quarter eagle coins.

Saint-Gaudens worked with Roosevelt for several possible iterations of the coin, but he sadly passed away on August 3, 1907, before a design was decided upon. Every coin but the cent had been redesigned by 1908. The centennial of Lincoln’s birthday would happen in February 1909, and Roosevelt wanted a way to honor the fallen President. Before this time, no actual person had ever been immortalized on a coin.

Roosevelt met sculptor Victor David Brenner in 1908 and immediately liked a Lincoln sculpture the artist had created. Brenner began work on a Lincoln-centric coin and stated that he envisioned Lincoln reading to a child. Brenner worked to perfect the design throughout 1908 and 1909, and when Roosevelt left office, Brenner worked with new President William Howard Taft. After several more changes to the design, it was finally approved by Secretary of the Treasury Franklin MacVeagh on July 14, 1909.

Americans were incredibly interested in the new penny design, as the Mint did not permit early images to be released to the public. Many believed that Lincoln may be the face of the new cent, as excitement from the centennial was still abound. The plan was for a simultaneous release of the coin across the country on August 2 from both Mints in Philadelphia and San Francisco.

One big point of controversy was the appearance of Brenner’s initials on the base of the reverse. Some even argued that the initials were seen as advertising, thus rendering the coins illegal. On August 5, Secretary MacVeagh ordered the suspension of production until the issue could be sorted, and by August 12, a new version without Brenner’s initials was released.

From 1909 to 1958, the “wheat cent” was issued featuring two stalks of wheat on the obverse. In 1959, the Mint started production on the Lincoln Memorial design that we know of today. This redesign came as a complete surprise to the public and was initially released on February 12, 1959, the 150th anniversary of Lincoln’s birthday. This design remained until 2008, and the Lincoln Bicentennial cents came out in 2009. The newest design of the Lincoln cent in 2010 introduced the Union shield on the reverse.

The Lincoln cent may be underestimated, but it has a fascinating past. If you’ve got an older penny in your coin collection, you might consider selling it when you’re looking to sell silver coins or other old money. Collectibles Investment Group is proud to offer accurate, quick, and FREE appraisals of all your collectibles. Contact us today to get started!