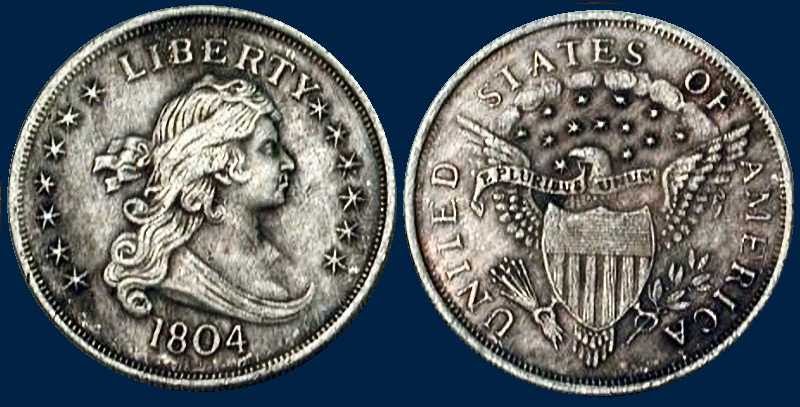 Of all the valuable silver coins floating around, one of the most incredible is the 1804 dollar. Also called the Bowed Liberty Dollar, this coin is one of the rarest pieces to ever be put out by the U.S. Mint. It’s been said that only fifteen pieces have ever existed! If you’re selling silver coins and you run across this piece, get ready for a big boost in your bank account!

Commercial shipper Edmund Roberts spurred the discussion surrounding this coin after a visit to Asia in 1832. Roberts had taken gifts for Said bin Sultan, the Sultan of Muscat and Oman at the time, but upon his return, Roberts said he believed his gifts to have been insulting and inadequate. He requested a set of coins as a more appropriate offering, which President Andrew Jackson approved of.

Mint Director Samuel Moore was directed to create the collection (along with a duplicate set for the Department of the Treasury) as well as two Morocco leather boxes to keep the coins in. The Mint requested both silver dollar and gold eagle coins to be produced, but no silver coins had been made since March 1804. The coins were delivered to Said bin Sultan in October 1835 and to King Rama III of Siam in April 1836.

One thing that makes these coins so unique is the date. Though the events were taking place from 1832 to 1836, the dates on the diplomatic gift sets were printed as 1804. To this day, historians aren’t sure why that date was chosen, though several theories have arisen. Many believe that the date was selected so that collectors wouldn’t be angry if they couldn’t acquire the 1834-dated coin.

The 1804 Silver Dollar was printed in three classes. Class I refers to the original diplomatic gift set and other examples that were struck with the same dies. Only eight of these coins are in existence today. Class II coins were struck in 1858 after the coins got more publicity and demand from collectors. In contrast to the Class I, these coins had plain, unlettered edges, instead of the standard issue Draped Bust dollars. Today, there is only one known Class II coin.

Class III coins are identical to Class II coins other than the lettering on the edge, which more closely resembles that used on the Class I pieces. These coins are believed to have been struck as late as 1876, and today, there are only six of these coins in existence.

As you might expect, such a rare coin has been counterfeited countless times. However, if you do find yourself with one of these incredible pieces, you have a truly special piece on your hands. The coins have had an unbelievable value throughout their existence, if only due to the rarity. In 1903, a Class III coin sold for $1,800, worth over $52,000 today. A Class I piece brought in $990,000 at auction in 1990 (more than $1.9 million today).

The all-time high price came in 1999, when a coin was graded Proof-68 by the Professional Coin Grading Service. This piece is believed to be the original presented to Said bin Sultan and was auctioned for a whopping $4.14 million, which translates to over $6.37 million today. This was the highest paid price for any coin at the time.

If you’re a long-time coin collector or history buff, the 1804 Silver Dollar is an incredible piece. Be sure to look closely when you’re selling silver coins! Even if you don’t have this stunning coin, Collectibles Investment Group is happy to provide a free appraisal of your coin collection. Contact us today to learn more!