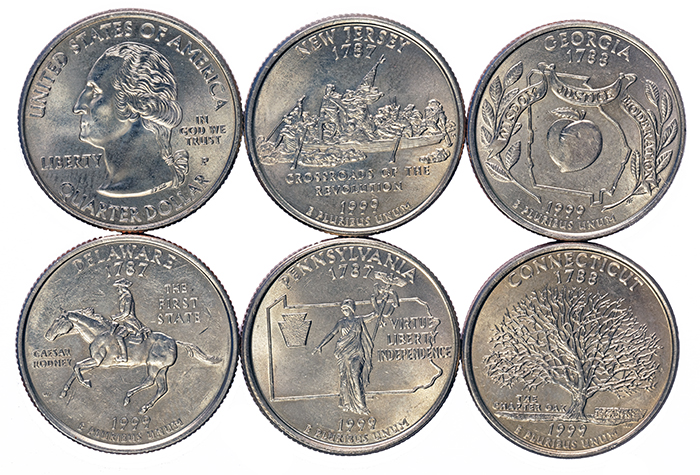 If you live in the U.S., you likely remember the 50 State Quarters Program that ran from 1999 to 2008. The program was started in an effort to bring coin collecting back into the forefront of people’s hobbies, and it was a resounding success. You can still find these stunning quarters in almost any cash register or piggy bank! If you’re looking to sell silver coins, you’ve probably stumbled across many of these treasures.

The 50 State Quarters Program was active from 1999 to 2008 and involved periodic releases of commemorative state quarters from the United States Mint. The idea for the program came from the Citizens Commemorative Coin Advisory Committee (CCCAC), specifically member David Ganz. The program was actually approved in 1995, and the CCCAC approached Representative Michael Castle for support, as he was chairman of the House Banking subcommittee and had jurisdiction of the U.S.’s coins.

The program found initial opposition from the Treasury, as they believed commemorative coins were associated with abuses and excesses. The CCCAC and Mint Director Philip Diehl presented economic models that the Treasury found to lack credibility. Finally, the Treasury suggested a study to determine the program’s feasibility, which was conducted in 1997. Despite positive results, the Treasury still opposed the program. It finally became law under S. 1228, signed into law on December 1, 1997.

Logistics of the Program

Throughout the program, coins were released in the order that they ratified the U.S. Constitution. There were five new quarters released every year with one new coin coming out every ten weeks. Every state was allowed a large role in the design of their coin, though certain elements such as images of living people and state flags were prohibited. In many states, the governor would encourage state citizens to submit design ideas for consideration.

Once a collection of designs was decided upon, the governor submitted three to five designs to the secretary of treasury, who would then narrow down the selection. From there, states used one of two methods to decide the final design. In most states, the governor and advisors made the decision, but in several states, citizens were allowed input and voted on their favorite.

Despite the initial opposition from the Treasury, the 50 State Quarters Program became the most successful commemorative coin program in U.S. history, with an estimated 147 million Americans collecting the quarters and 3.5 million citizens participating in the design selection process. In total, more than 34 billion coins were produced.

Each coin has its own unique design, some reflecting the state’s history and others speaking more to the culture. For instance, New Jersey’s quarter has an image of the famous Washington Crossing the Delaware painting, whereas Georgia’s coin features an outline of the state and a peach. Additionally, each coin has a short phrase. Many states chose to include their state nickname, like “The Palmetto State” for South Carolina or “Great Lakes State” for Michigan. Some states chose more unique phrases, like Colorado’s “Colorful Colorado” or Indiana’s “Crossroads of America.”

Many of the coins set records or featured design elements never before seen in U.S. currency. For instance, the Alabama state quarter features Helen Keller with Braille writing, the first time Braille was every featured. The D.C. coin displays Duke Ellington, the first major instance of an African American on circulating U.S. coinage. Illinois had the first coin to directly reference an urban city (Chicago), and Hawaii’s coin is the first to feature royalty (Kamehameha I).

The 50 State Quarters Program was instrumental in bringing the hobby of coin collecting back into the spotlight. If you’re interested in buying or selling silver coins, this collection might be a good place to start! No matter how big or small your collection, Collectibles Investment Group is happy to provide a free appraisal from the comfort of your home. Contact us today to learn more!

Tags: Coin Specifics, Logistics of the Program, sell silver coins
Get Your Collection Appraised For Free