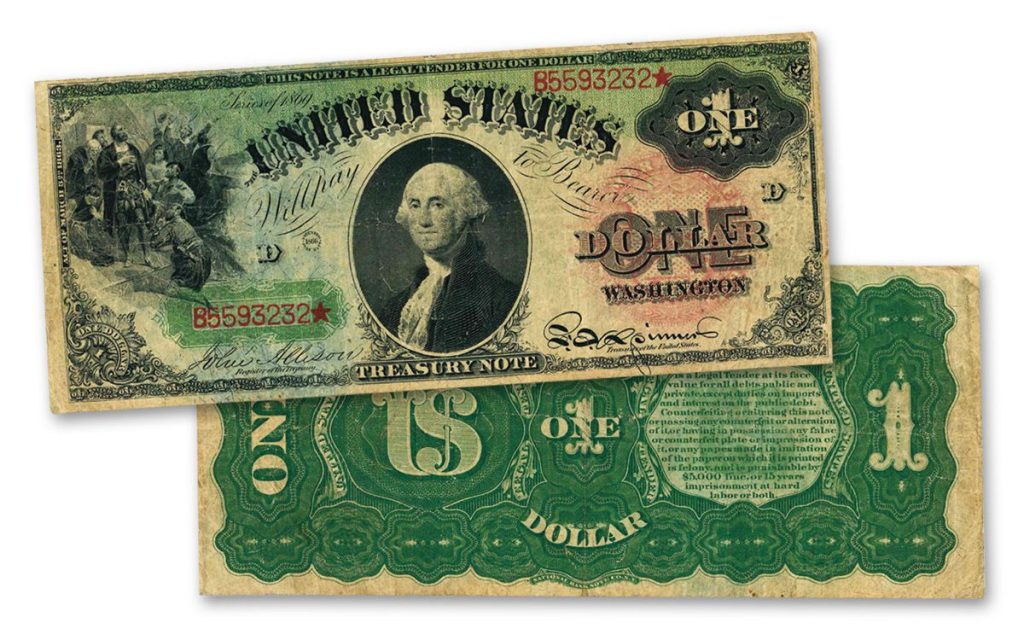 It’s not that hard to find out about the most valuable gold coins, but what if you’re trying to sell old paper money? We don’t talk about valuable paper money quite as often, but there are definitely bills out there that collectors are constantly searching for. One of the most unique pieces of U.S. tender is the 1869 Rainbow” Notes. If you’ve got one of these pieces in your collection, you could be looking at a significant profit! Here’s a bit of history on this special bill.

About the “Rainbow” Notes

The dollar bills known as “Rainbow Notes” were printed under the authority of the Congressional Act of March 3, 1869. This act authorized the printing of $150 million in U.S. banknotes for a number of denominations $1 or greater. They are called “Rainbow Notes” because of the multiple colors visible, including a blue partial tint on the whole bill, green serial number frame, and a red/pink Treasury seal. The back of the note is entirely printed in green ink, as is now traditional with most banknotes.

One of the reasons these bills are so sought-after is the historical figures on the front. The $1 bills feature President George Washington in his first appearance in that denomination. Washington’s portrait on the bill comes from Athenaeum Portrait, an unfinished painting by Gilbert Stuart in 1796. This painting is considered Stuart’s most notable work and was engraved by Alfred Sealey. Other historical figures include Thomas Jefferson on the $2, Andrew Jackson on the $5, and Henry Clay on the $50.

From 1869 to 1875, there were almost 42 million Series of 1869 $1 Rainbow Notes issued. Every note had a prefix of either A, B, K, V, or Z, and every serial number included a star at the end. These notes are incredibly sought after and are arguably one of the most desirable issues of all American federal currency.

Even beyond the $1 note, the other pieces of the Rainbow Notes printing are sought-after as well. The $500 Note features a portrait of President John Quincy Adams, and there are just over 89,000 examples that have every been printed. To date, only three are known to exist. Similarly, the $1,000 Note features a portrait of DeWitt Clinton, and only two copies are presently known to exist: one stays in the Federal Reserve Bank of Chicago, while the other remains in a private collection.

Part of what makes these bills so valuable is the inflation rates. Though the $1 bill was worth just $1 in 1869, the monetary value today is upwards of $18. While this might not seem like a huge jump, the bigger denominations are definitely noteworthy. The $500 bill from 1869 is worth over $9,400 today, and the $1,000 bill is worth a whopping $18,000. When you also consider the rarity of the bills, there’s no question why they fetch so much at auction today.

The larger denominations are particularly rare because they simply weren’t printed as highly back in 1869. $1,000 was an incredible amount of money back then, and the average citizen would have no need for a bill worth that much. However, paper money collectors today covet these pieces, making them some of the most valuable bills in the hobby.

If you’re looking to buy or sell old paper money, Collectibles Investment Group can provide quick, accurate, and free appraisals from the comfort of your home. We also appraise coins, sports cards, comic books, and more. Contact us today to schedule your free appraisal!