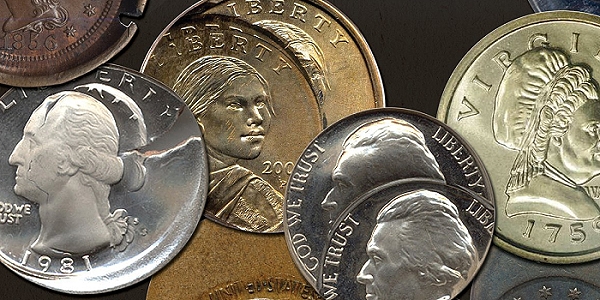 If you’re a coin collector, you probably know a bit about the minting process. While the vast majority of coins look exactly the same, you will sometimes come across a coin with an error. In many occupations, making an error doesn’t make the end product more valuable, but the opposite is often true with coins! If you are interested in selling gold coins or silver coins, look through your collection to see if you can find any of these errors. It just might turn out that an error makes your coin worth way more than face value!

Typically, when a coin is struck, it goes through the process only one time. However, sometimes a coin will go through the press a second or even third time, resulting in multiple images shown on the head or back. The additional image will appear slightly off center. The more times the coin was struck and the more images appear, the more valuable a coin might be. One popular example of this is the 1976 D Washington quarter, which is particularly valuable because there are off-center strikes on both sides of the coin as opposed to just one side.

Before a coin is stamped with an image, it’s simply a blank piece of silver or copper. When the coin is completely flat, it is referred to as a blank coin, and when it has received an upraised rim but still doesn’t have an image, it is called a planchet. Admittedly, planchets aren’t worth a ton, but they are worth more than face value. Smaller coins like pennies might fetch $2 to $4 each, while a planchet of the Eisenhower dollar, for example, might sell for around $20 or $30. Blank coins without the upraised rim are hard to authenticate but can sell for $50 or more.

A wrong planchet coin refers to a piece that was struck on a planchet meant for another type of metal or denomination. So, for example, if the image of Abraham Lincoln was stamped on a dime, this would be a wrong planchet coin. A few examples here include the Kennedy half silver 1964 and Roosevelt dime 1964 transitional. While this mistake often occurs domestically, it very rarely happens that a denomination is struck on a foreign planchet. This mistake happened occasionally with U.S. and colonial coinage throughout the 17th, 18th, and 19th centuries.

This mistake is pretty self-explanatory. When you’re selling silver coins and looking through your collection, see if you can spot one that has part of the design missing because it was incorrectly centered. These off-center coins are the result of the planchet not being properly inserted into the press. One of the most valuable examples of an off-center coin is the 1923 Peace dollar. The coin was struck almost 50% off center then was repositioned and struck again.

If you want to look through your coin collection to see if any of these errors come up, create a system to give yourself the best chance to catch the mistake. Equip yourself with a good lamp, magnifying glass, and soft cloth. Sort your coins into groups by denomination, then look carefully at the inscriptions, date, and mint mark. Refer back to this guide for what you should be looking for, and be sure to check both sides of the coin as well as the edge.

When you’re selling silver coins, gold coins, paper money, or any currency, start with an appraisal to give you an idea of your potential profit. Collectibles Investment Group is happy to provide a quick, easy, and free appraisal right from the comfort of your own home. We can also look into comic books, sports cards, fantasy cards, and more. Contact us today to get started!