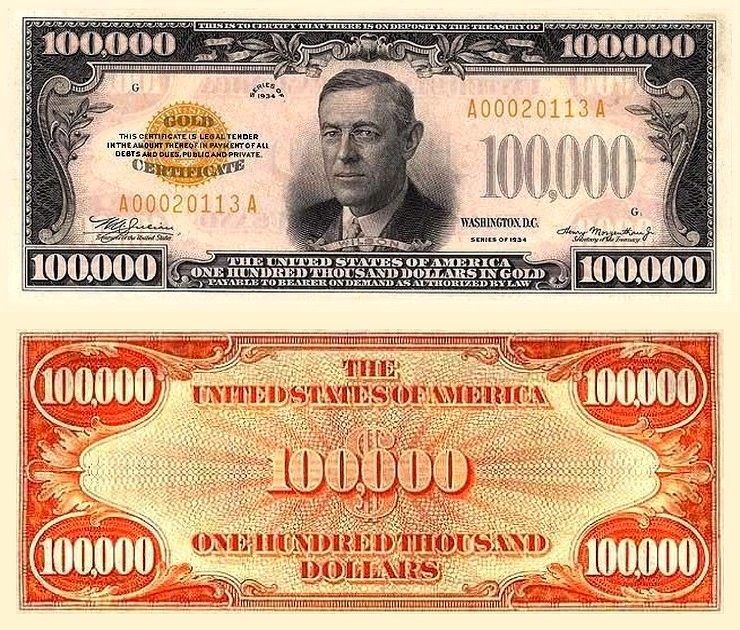 These days, it’s hard to picture a dollar bill worth more than $500. Most of us consider ourselves lucky to even run across a $100 bill! But could you imagine a bill worth a whopping $100,000? During the Great Depression, that was actually the reality. But the story is a bit more complicated than you might think. Regardless, the $100,000 bill was one of the most valuable bills out there, and it remains a fascinating bit of history that the avid collector is sure to love.

In 1933, the United States and the world as a whole was truly feeling the effects of the Great Depression. President Franklin D. Roosevelt ordered all Americans to surrender any gold that they still possessed and turn it in to the government, including gold coins, bullion, or certificates. The reason for this order was that no one used cash anymore. In addition, the government wasn’t seeing much money because gold bartering and hoarding.

On top of trying to help the government and the economy as a whole, President Roosevelt was also trying to bail out banks. Roosevelt put forth the idea that the Treasury should take control of the Federal Reserve’s gold supplies. This would allow the federal government to devalue the dollar and reflate the economy, but it would also stop the Fed from being independent.

Congress approved the Gold Reserve Act of 1934, which established a federal exchange rate of $35 for gold; the trick was that this new rate was only meant for foreign exchange. This move allowed the Treasury to produce bills that would pay for the Federal Reserve’s gold, and one of these bills was the famed $100,000 note.

This bill has a portrait of President Woodrow Wilson on the front, along with the United States Treasury seal and the words “GOLD CERTIFICATE,” among other elements. On the reverse, all printed elements appear in orange, which is a stark contrast to the green bills that we’re used to seeing today. The center image is simply the number 100,000 in front of a dollar sign ($) with two lines through it. Again, this is in contrast to many of the bills we see in circulation today with landmarks or monuments pictured.

While the $100,000 bill is still considered legal tender, it has not been circulated since the 1960s. 42,000 notes were printed in total, and many of them were destroyed after circulation ceased. All of those that do still exist are the property of the U.S. Government, and it is illegal to privately own a legitimate copy. It’s relatively common to see forgeries of these notes.

The $100,000 banknote is a piece with a story that can interest collectors and history lovers of all kinds, and while you can’t have one in your collection, it’s certainly a cool piece to see if you can get to a museum or Federal Reserve Bank with a copy. As far as the rest of your valuable paper money, you might be able to fetch a pretty penny (pun intended) if you have a particularly rare piece. Let Collectibles Investment Group take a look at your collection before you decide to sell! Our team of experts can appraise coins and paper money, sports cards, comic books, and other collectibles to tell you exactly what you can expect to sell for. Best of all, our appraisals are quick, easy, and free! Contact us today to schedule your free collection appraisal.

Tags: most valuable bills, The $100 000 Bill, valuable paper money
Get Your Collection Appraised For Free