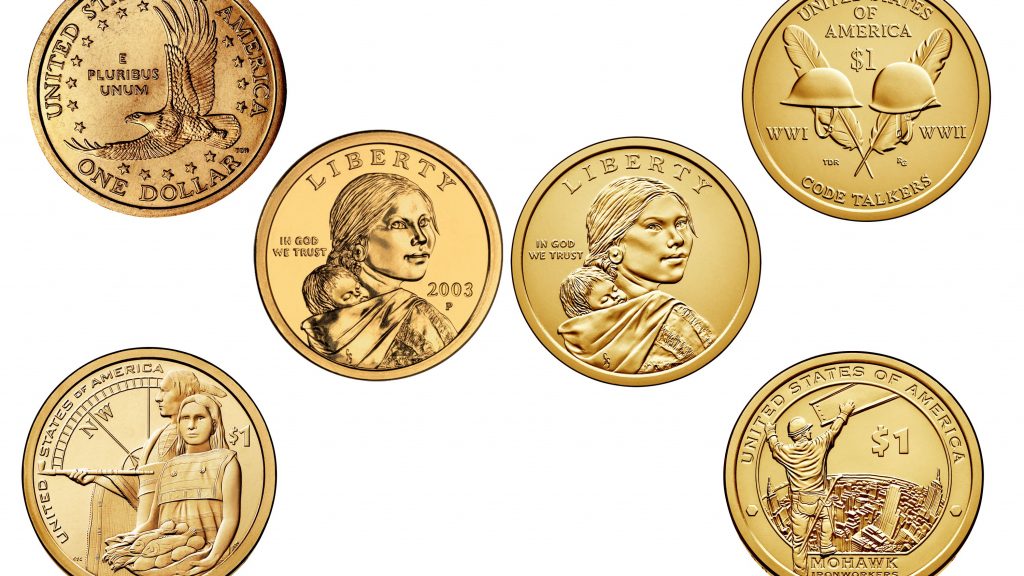 We’re used to seeing well-known faces on our U.S. coinage, but most of these figures tend to be older white men. It’s not too common to see a Native American woman on the face of a U.S. coin. However, the Sacagawea dollar is a famous piece that features an incredible icon to our nation’s history. Sacagawea was the Shoshone guide that helped Lewis and Clark along their Expedition throughout the Louisiana Territory. This piece has been in circulation since 2000 and remains a valuable gold coin for coin collectors everywhere, especially for error coins.

Congress started to develop a coin in 1977 that was intended to replace the larger Eisenhower dollar. They began with a smaller coin depicting Susan B. Anthony, though these coins didn’t take off the way Congress hoped they would. Minting stopped in 1981, but by the mid-1990s, the Treasury started running out of Anthony dollars (mainly due to their use in mass transit systems and vending machines) and needed to come up with a replacement.

Minnesota Senator Rod Grams introduced a bill in October 1997 that called for the minting of a new dollar coin. By December 1, the legislation had been approved by Congress and President Bill Clinton had signed the 50 States Commemorative Coin Program Act. Section 4 of the act called for the new coin to be struck and gave a few guidelines for its appearance: “The dollar coin shall be golden in color, have a distinctive edge, have tactile and visual features that make the denomination of the coin readily discernible.”

The Anthony dollars actually began production again until the newly designed gold coin could be minted. The legislation signed in 1997 gave instructions for the color and edge but did not give direction for who should appear on the coin. Treasury Secretary Robert Rubin put together a Dollar Coin Design Advisory Committee that had nine members. Rubin was clear in that the coin should depict one or more women but no one living. After some deliberation, the committee suggested Sacagawea on June 9, 1998.

After Sacagawea was officially agreed upon, it was time to decide on a design. Several Native Americans were chosen to review the potential designs to ensure that the coin was authentic and sensitive to the Native American culture. The design chosen depicted Sacagawea with her baby son, Jean Baptiste Charbonneau, strapped to her back. This design ran from 2000 to 2008.

In 2007, President George W. Busy signed the Native American $1 Coin Act, which, among other things, stated that the reverse of the coin must have a new design every year. Each year, a committee decides on a theme for the potential new design, designs are created and reviewed by the Citizens Coinage Advisory Committee, and the Mint selects the final design and recommends it to the Secretary of the Treasury.

While most Sacagawea coins aren’t worth more than their face value, some mule error coins from 2000 are worth quite a bit more. These coins feature President George Washington on the obverse (an image reserved for the U.S. state quarters) and the traditional eagle design on the reverse (the image that is meant to appear on the Sacagawea coins). 11 error coins were originally discovered, and today, eight are said to still exist. Sale prices for these coins have been seen to be upwards of $200,000.

While the Sacagawea dollar might not be the most valuable gold coin out there, it certainly has a fascinating history. If you do ever come across one of the mule error coins, you could be looking at a huge sale! Whatever gold or silver coins you have in your collection, Collectibles Investment Group would be happy to appraise them before you sell. We also appraise other collectibles like comics, paper money, sports cards, and more. All appraisals are quick, easy, and free! Contact us today to schedule your appraisal.