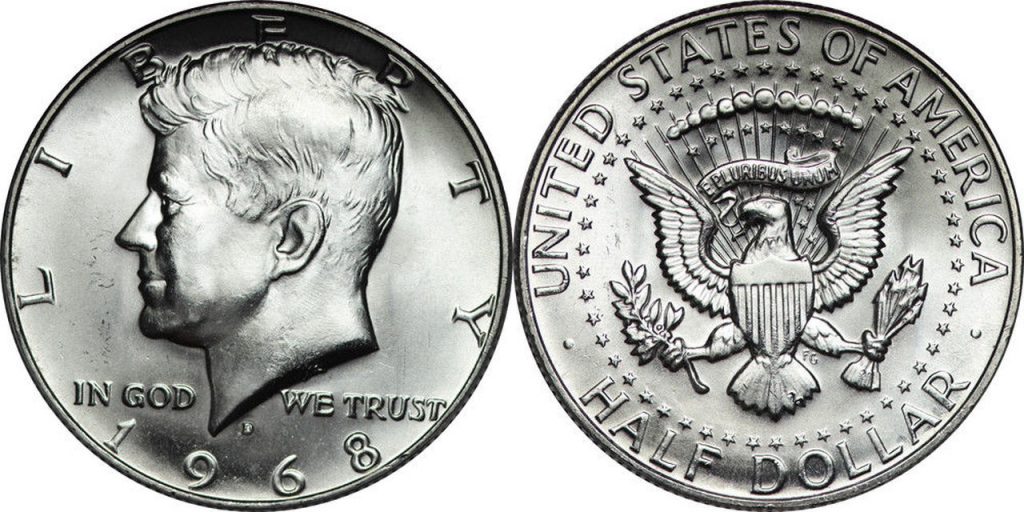 Many currencies offer a fifty-cent coin or the equivalent, but in the United States, half dollar pieces are not particularly common. Many collectors search for half dollars on their hunt for valuable silver coins or valuable gold coins, but it’s not a piece you’re likely to find in your piggy bank. The Kennedy half dollar is one of the most recognizable pieces of U.S. currency, and many are proud to have it in their collection. Here’s a quick look at the history behind this iconic piece.

The Kennedy half dollar was issued as a memorial to the late President John F. Kennedy after his assassination on November 22, 1963. However, the government had already been considering crafting a coin with JFK’s depiction before his untimely death. Within hours after the President’s death, Mint Director Eva Adams reached out to Chief Engraver Gilory Roberts. The original plans had been to put JFK’s image on either the silver dollar, half dollar, or quarter.

The project was officially authorized on November 27 after Kennedy’s wife Jacqueline approved her husband’s image to be used on the half dollar. She stated that she didn’t want her husband on the quarter because she didn’t want to replace President Washington.

The coin needed to be struck quickly, so Roberts altered an existing bust of Kennedy that he’d used for the Kennedy medal in the Presidential series. He worked with Frank Gasparro to finish the design, and after trial strikes had been produced, Jacqueline and Robert Kennedy first viewed them and gave their input on the design.

President Lyndon Johnson was immediately on board with the new coin, thanks in part to numerous letters from the public that urged him to agree with the plan. Johnson endorsed the call for the coin on December 10, and the bill officially passed on December 30. The first coins that would be put into circulation were completed in Denver on January 30, 1964, followed by more in the Philadelphia Mint the following week.

As you might expect, the Kennedy half dollar quickly became a sought-after piece. Coins were first available to the public on March 24, 1964. In Washington, 70,000 coins were initially allocated for customers at a limit of 40 per person, but they quickly depleted the supply without satisfying the full demand. Sales in New York, Boston, and Philadelphia saw similar occurrences, and the coins were also popular in overseas locations.

Seeing the incredible demand, the Mint quickly raised its initial issue of 91 million coins up to 141 million. However, even though the public was informed of the increase, coins weren’t actually circulating and were often being kept as collector’s items.

The coin was initially struck with 90% silver, but that figure decreased as prices rose. Circulation strikes since 1971 contain no silver, but the final issue with the metal contained a total of 40% silver. The 2014 gold issue coin contains 99.99% gold.

The coin was struck for circulation throughout the 20th century, though demand dropped off in the later years. A few changes were made to the design in 1991, and by 2002, the coin was no longer being struck for general circulation, though it is still available from the Mint at a premium.

Proofs of the Kennedy half dollar are still struck with the same regularity as other pieces of U.S. currency, so they’re not particularly rare. However, some varieties will still sell for a pretty penny. For instance, the 1964 Special Mint Set (SMS) half dollar has become a coveted piece. This coin features a satin finish with particularly well-defined strikes and die polishing lines, and it’s believed that just a dozen of these examples exist today. In 2016, one example of the coin sold for $47,000.

The Kennedy half dollar is a staple in any coin lover’s collection, and if you’ve got the right version, it can be an incredibly valuable silver coin. Collectibles Investment Group would be happy to appraise your coins, comics, sports cards, or other collectibles for free! Contact us today to schedule your free appraisal.