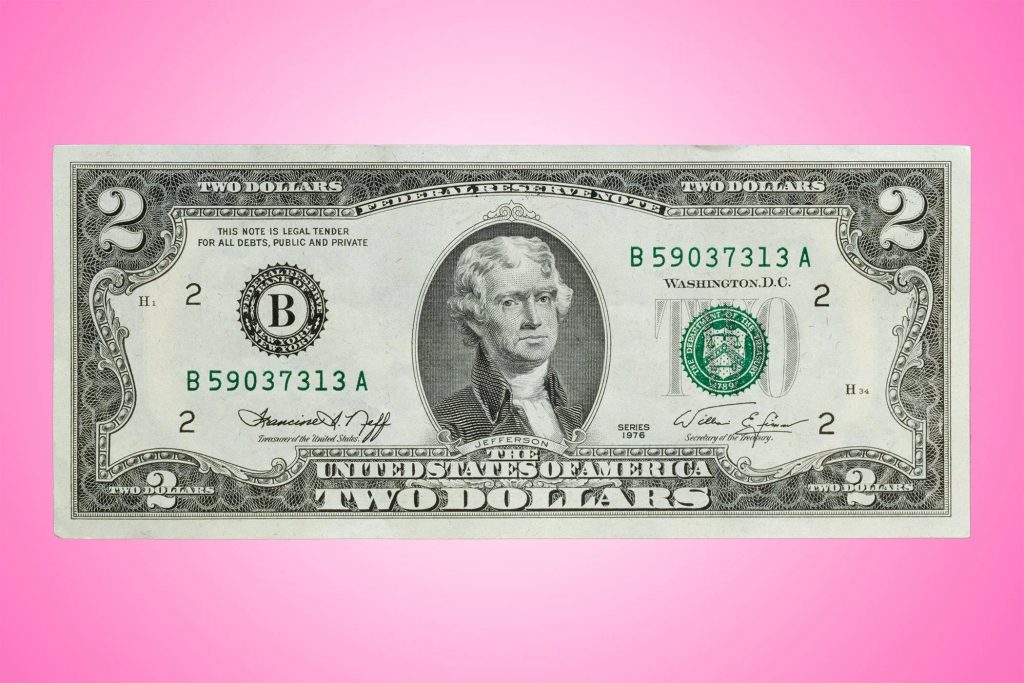 We deal with a lot of paper money in our everyday lives, but the $2 bill isn’t something you see every day. Often, it can feel incredibly special to have a $2 bill in your paper money collection. But if you’re looking to sell old paper money, could a $2 bill be worth much more than face value? Why does this bill seem so unique when most other currencies out there have a common $2 piece (or equivalent)? There’s a lot of unique history behind this special piece of currency. Let’s take a look.

The $2 bill was first authorized by Congress in March 1862 and was continuously used until 1966. The bill was assigned as a United States Note as its sole class of currency. In August of 1966, the Treasury called to discontinue production of both the $2 and $5 denominations of United States Notes, but since the $5 was also a Federal Reserve Note, it wasn’t fully discontinued. The $2, on the other hand, was not immediately reassigned to another class.

10 years later, production of the $2 started back up again, and the bill was assigned as a Federal Reserve Note. Previously, the reverse design featured Monticello, but the newly issued bills featured John Trumbull’s Declaration of Independence painting. Bills have been subsequently printed with series dates of 1995, 2003, 2009, 2013, and 2017.

The fact is that $2 are not as rare as many people think they are. It’s actually more cost-effective for the government to print $2 as compared to $1, but the public is widely responsible for the low printing of the bills. Throughout the Great Depression, many families simply didn’t have enough money to justify $2, and during the mid-20th century, the bills got a bad reputation when they were used to tip at strip clubs and bet on horse races.

For the 1976 printing, many citizens believed the $2 and its unusual reverse design was the result of a special printing for the United States’ Bicentennial. Since people though the bill was limited edition, many chose to hoard the bills rather than spend them. However, this assumption was completely false. The combination of this hoarding along with the earlier discontinuation of the $2 has led to today’s belief that the bill is incredibly valuable.

Many people even believe that the $2 is no longer being printed. There have been several printings of the $2 with series dates throughout the 20th and 21st centuries. However, it is notable that the Federal Reserve Board did not order any $2 to be printed in 2020. The 2019 printing is predicted to be large enough to last for several years.

$2 notes are commonly accepted by most bill acceptors in circulation today, even if the machine doesn’t specifically say so. If you try to use a $2 bill at a vending machine, transit system, or self-checkout, your bill will likely be accepted. You can also get $2 at your bank, though your teller might have to head into the vault or order the bills if you need more than they have on hand.

$2 bills have also been used to make a particular group visible. For instance, Geneva Steel in Utah paid its employees’ bonuses in $2 bills in 1989. Some use $2 bills as a nod to the Second Amendment, and fans and alumni of Clemsen University are known to bring $2 bills to games in order to show their economic impact on the area.

While $2 bills might not be the most valuable paper money you can find, they’re certainly a cool piece to have in your collection. If you’re considering selling your old $2 bills or any other collectibles, let Collectibles Investment Group appraise your pieces for free! We can look at your coins and paper money, comic books, sports cards, and more. Contact us today to get started!

Tags: sell old paper money, The Wonder of the $2 Bill, valuable paper money
Get Your Collection Appraised For Free